Hitching to Fukuoka and beyond

I have time now to describe how things went getting from Yakushima to Fukuoka- this is how it played out.

I put up those pictures of Yakushima on my last day there, a very rainy one spent in a hostel at the port enjoying endless free cups of tea. The next day I got a boat at 8.30 in the morning that I expected to arrive in Kagoshima at two. It ended up getting in at four and to a different port than I'd expected.
So I started hitching and after 5 minutes I got a lift 15km up the road with a man named Hideki on his way to work who laughed at how late in the day it was to be hitchhiking ( I'm yet to know how to say "Hope springs eternal" in Japanese).

I then waited 20 minutes on the outskirts of a small town before being picked up by a woman named Miyo, who teaches kendo, and her 1 year old son whose name I didn't hear properly, but who decided we were kindred spirits and sat gazing into my eyes for the next twenty minutes.
Miyo said she had to do a few errands but would be very happy to give me a lift a bit further north.  Four hours later and I was dropped off at the side of a fairly major road heading north, having gone with Miyo to pick her other two children up from school and then out to a restaurant with her family and her neighbours, the mode of transport being a ralley car with tinted windows and an engine that sounded like a Siberian tiger roaring at the sunrise. Not the kind of car that, looking at the outside, you'd expect to be full of high-spirited and noisy children, and I had a smile on my face the entire drive from knowing at least one family uses this kind of car without taking it too seriously. The children wished me well as I wandered off into the lights of the convenience store to wait for another ride. 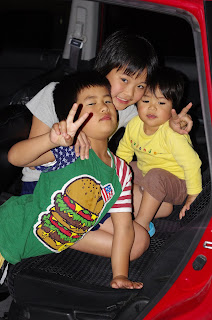 I doubted I'd get a lift after nightfall and was expecting to have to wander off and set up the tent but I decided to give it a try anyway. Got three more lifts up the road where I then had a two hour liftless wait between eleven and one. Decided to wander around till I found a McDonalds where I bought a token apple pie and dozed in the corner for a while, the staff having welcomed me to do so when I told them a bit about my journey. At five the next day I went to face the traffic. I've discovered throughout this trip that playing a short piece of music in my head sends me into a meditative state where I'm happy to stand for hours on end with a sign and a smile and not feel daunted by the stream of vehicles passing without stopping (see last post), so I did the same here and got a lift at seven.

To speed things up a bit, I ended up getting about seven more lifts that day from a diverse range of people, all of them fascinating and helpful, forcing food on me and making diversions to points of interest (such as kumamoto castle.) 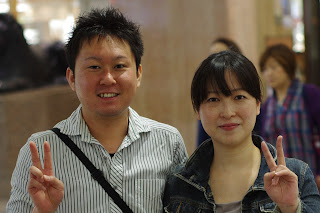 I got into Fukuoka with a lovely couple from Yame who took me to a Tempura restaurant en route before dropping me off in the centre of town where I met my friend Syuzo.

I spent two days in Fukuoka with Syuzo where among other things, this happened:


And the next day he dropped me off in Hyogo on his way to work in Nagano for a week.

I've run out of energy and time to talk about where I am right now but will catch up with that soon enough. I'll just say for now it's a farm run by people whose company and thoughts I enjoy no end, and that my appetite is getting smaller as the food I eat has become so much richer nutritionally I'm no longer having cravings in the same way. Result!