OK Its been ten days and I've posted nothing. Today I went kiting on Durdham downs, a big expanse of grass up by a gorge in Bristol. Great weather, the kite I use is a ten foot flexifoil power kite, it pulls pretty hard when there's a lot of wind.
Here are some photos of the cool skies: 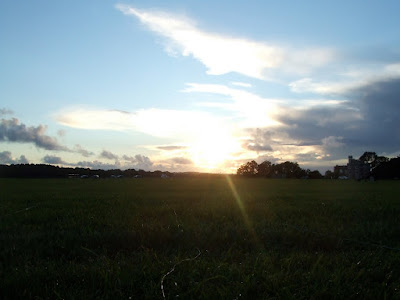 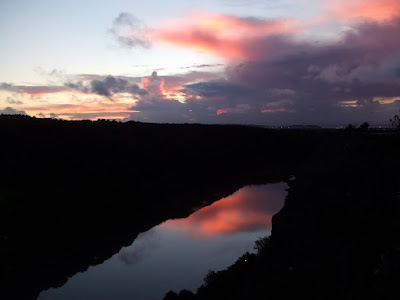 Here's the picture I've set my desktop background to, in order to get me in a travelling mood: 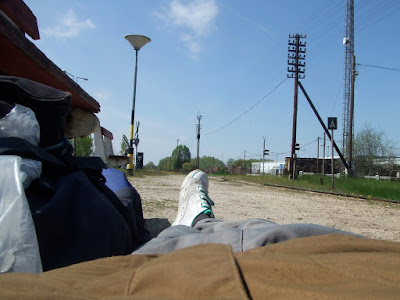 For the moment I don't really have means of generating that much content (camera is broken, haven't gotten round to vlogging from my computer (I don't like vlogging) so you're stuck with the best of my stumbles for now.

And because I just feel like whapping out a few photos, here are some from Japan that I never actually got onto the net. 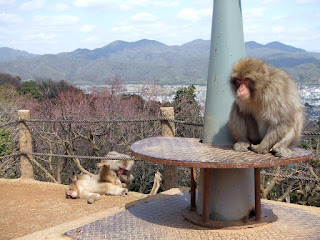 These are Japanese Macaques hanging out in Arashiyama monkey park, where every so often the speaker blasts out fast-paced circus-esque music and the keeper marches through the monkeys scattering food left and right. 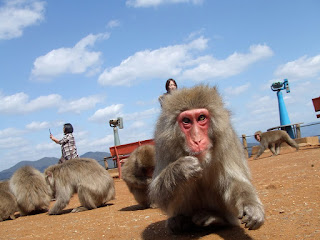 This monkey took a swipe at me just after this photo and I dived out of the way (some friends of mine got chased down the hill by a hoarde of them, they're pretty energetic).
Visitors can also feed the monkeys, but in a wacky reversal of captivity where the humans are enclosed in a shed with mesh windows that the monkeys then climb on. You can only feed them whilst (you're) indoors, a method which dissuades them from mugging the innocent bystanders walking outside (yours truly).
Here's Zoe feeding the monkeys: 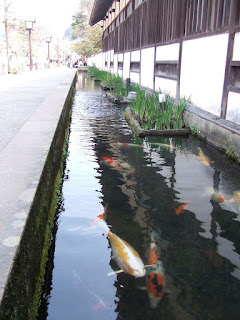 This is one of the many carp-filled troughs that line the roads in the town of Tsuwano, Western Honshu. Don't know why I didn't take more photos, its a really nice place. We'd been volunteering on a farm nearby and on our day off went to see the koi and a display of yabusame. Now I don't know if yabusame is the word for the practitioner or for the sport/art but as you can see they look amazing. Note the fawn skin trousers! 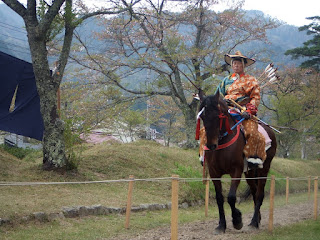 The polite cheers take away some of the samurai atmosphere but it was still a special experience, and demonstrates one of the great things about WWOOFing: the sharing of local knowledge.
For those who don't know what WWOOFing is, here is a brief summary:
World Wide Opportunies on Organic Farms (WWOOF) is a worldwide program with independent organisations in each country (or sometimes continent).
As a volunteer you contact the owners of farms and smallholdings and you work with these farmers in exchange for accommodation and food (and ideas, great memories and cultural understanding). No money is exchanged between farmers and workers.

So yeah anyway last year I did 5 months of wwoofing with my then-girlfriend Zoe and Tsuwano and the Yabusame are things we got to see through our WWOOF host in Masuda (Shimane, West Honshu), Iwamoto-san, who wanted us to have memorable experiences on our days off. Despite the tourist potential of a display like this we hadn't seen posters or heard of it at all (and didn't really know what Iwamoto-san meant until we got there).

Maybe displaying more of the Japan backlog would be a good idea, sure I'll throw a few photos this way soon, along with any other bits from around the world that might interest you (I don't know who 'you' is yet, I haven't told anyone about this blog!).
Posted by Mike at 16:28 No comments:

Discovery of the weekend: Glaucillus Marginata

I don't know about you but I think this is absolutely boomting:

Its a mollusc, it looks like that pokemon and it can kill a Portugese Man O' War (as in the badass sometimes-deadly jellyfish).

Recently I've been delighted to find other things that I didn't know existed, such as the fire tornado and the rainbow eucalyptus.
Don't for a second think I consider myself so world-weary that I don't expect to be surprised by anything any more, I just thought I had a fairly good understanding on natural disasters (I thought they stuck to one horrifying concept at a time!), the colours of tree bark (brown no?), and whether pokemon are real or not. And if they are real, where the hell's my Bulbasaur? (Probably down in the ocean vine-whipping a crab.)
Posted by Mike at 00:47 No comments:

Just to test the appearance of this blog- I will update it with my doings soon.
Posted by Mike at 14:56 No comments: