Just back from ten days travelling to London and back from Madrid. Excerpt here, rest to follow.


This Friday just gone I was waiting in a petrol station in the Basque country trying to get a lift south. The petrol station was a bit too close to the city and situated right where the roads forked, so it was hard to know where the majority of the traffic was going.  Most people seemed very well-dressed and looked like they were on their way to weekend plans. After about an hour and a half of standing there the daylight was fading and I was getting ready to find a place to sleep.
At that moment a man came past, looked at my sign, said he wasn't going that way and wished me the best of luck. He struck me as being someone worth talking to for a couple of reasons. One was his appearance. He was quite short, dressed in black working clothes that looked well-used. He had a bandana tied over his long brown-grey ponytail, wore round glasses and had a big bushy moustache. He looked a little bit like Robert De Niro and a bit like Elmo from Sesame street. I'd had a few shrugs and smiles that evening but there was something that suggested he was open to talking, so I asked him if he knew where I could camp around there. His smile straightened out and he looked at me carefully for a few seconds before saying: "You look like a good person. If you like you can stay at my place. I live in a converted bus in the woods."
I thought about this and said yes.  He asked if I'd eaten and we drove to the supermarket to buy some salad. Whilst finding onions we bump into a friend of his. They speak in rapid Basque before the friend introduces himself to me in Spanish then laughs and says in English 'This man is a cowboy.'  I wasn't quite sure how to take that one but we said our goodbyes and went to the till. I offered to pay for the salad and the cowboy refused.

During the drive to his it became apparent that he had been living alone for a long time, and it showed. There's a certain level of madcap thinking that comes from being alone which I tend to think is permissible but I wasn't sure on what side of the crazy line he fell. Later we drove past a pub and he said he doesn't go out much to bars as he's liable to get wild in them. At that remark I began to have some doubts and for the sake of posterity I decided to send a location-drop to a cool-headed friend who I knew would relay it to my family if I didn't re-appear in a few days. By that point we were actually in an area without reception and I had to abandon the idea. I sat there as we drove deeper and deeper down a thickly wooded mountain road, replaying our meeting in my head and reminding myself that it had been me who approached him initially.

Twenty minutes later I am sitting on a folding chair, watching big grey slugs sliding around the wooden surface of the improvised cable-reel table by candlelight. The man stands in the near distance washing the salad in a little basin screwed into a clump of hazel. He's shown me his horse, his numerous cats and kittens and the large french bus which he calls home. The interior is wooden-paneled and it must have taken a long time. There is a bathtub, a fold-down bed, a wood-burning stove and a large empty space at the back waiting for his time, money and thought.

He comes over with the food and suggests we eat in the bus. By this point I've reached peace with my initial feeling about his character and if there are further doubts I'll insist on sleeping up the hill in my bivi-bag.

In the bus we sit down to a small table laid with two plates of salad and some bread. The man goes outside and brings back a bottle of cider, explaining that his friend grows the apples and he helps press them in exchange for a couple of crates. I said I wouldn't drink a lot but would have some.

Well, we ate, drank and talked for about an hour. We talked about trees, woodland, family, expression of character, consumerism, time, money, perception of both and what things are necessary for living. He kept saying he had 'sufi'. This is a contraction of Spanish 'suficiente' and seemed appropriate to his mode of being. At this point he doesn't have much work, but he is a self-trained mechanic.

After dinner he explained that if I wanted a shower I was welcome to one and he'd leave the bus for as long as I took. I declined and he shrugged and laid out a thick folded blanket on the floor as a mattress for me. I fell asleep listening to the river and had the best night's rest I'd had in ten days.

In the morning I woke up and went outside. He was up washing his clothes and handed me a cup of coffee. It was about 9.30 and the sun was pouring into the valley. I walked around the place, inspecting the battered old minivan where he lived before the bus, the stable where his horse lived, the little garden where he was growing courgettes. After a brief conversation about gardening and a demonstration of scything he drove me back to the garage. 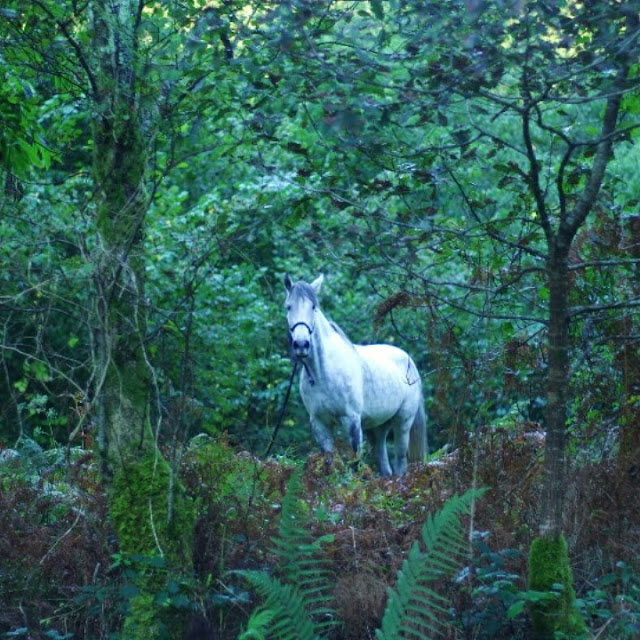