Well, as sure as the rivers run- its guaranteed I'll never be able to write up half of the stuff that happens over here- like that two hours running down the highway in the sports car talking about woodturning with a craftsman from Yamaguchi. Had a great final two days in Fukuoka and Nagasaki courtesy of Mochizuki and I'm now at the airport preparing for my twenty-seven hour trip home. See you all soon enough, might do a retrospective write up on the crazy tanbo antics I witnessed at the weekend,there are a few photos on flickr for the moment.
Posted by Mike at 02:47 No comments: 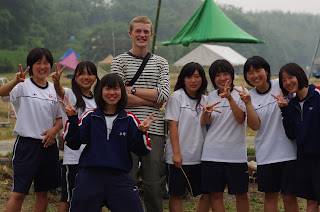 I left Gen's in the afternoon of the 13th. Expecting it to take me at least 4 hours of hitching and waiting to get to Naruto, I was surprised to find myself there in 2 and a half hours after being whizzed down the highway by Koga-san of the Japanese army who was practically crashing the car in his eagerness to get me there. When I arrived I realized I had no other plans, asides from seeing a couchsurfing friend that weekend, so decided to try out the one lead for Shikoku happenings I knew of.
Back on Zamami-jima a month and a half ago whilst looking for turtles I met a woman named Nampi who runs a health food shop near Takamatsu station named Pixie (big Pixies fan). I had no contact information for her but she'd said offhand let me know if you're in Shikoku because I know a few farmers you might enjoy meeting. I decided to hitch to Takamatsu and arriving there just before 9 at night I decided to hide from the rain in a skatepark and slept there, occasionally waking and mulling my fascination with skateboarding.
In the morning I went to the shop to find it was closed but Nampi's parents in law who live above put me in touch and later that day Nampi and her husband Yusuke picked me up at the station, told me they were taking me to meet a farmer named Kono and drove me through foggy countryside to a field with some stark, tall straw creatures, standing with an unnatural heaviness that I can only aliken to scattered bones.

In a nearby farmhouse I was introduced to a wild-eyed, wiry-haired laughing old man covered from head to toe in oil and holding an engine part. On hearing I was English he ran into the farmhouse and came back with a book on the beginnings of agriculture by Colin Tudge and started eagerly praising Darwin at a hundred Japanese words a minute. I didn't understand half of the words but Kono's joy transcends linguistical barriers and I soon found myself heartily agreeing in Japanese with what I felt was the jist of his deluge.
Nampi asked Kono if I could stay and work with him for a day and he said I was more than welcome, and I was whisked off to meet Ise who was just finishing his last day of work there. Ise is twenty one and walking from Okinawa to Hokkaido (the top to the bottom of Japan). He ended up staying two months at Konna's unintentionally. I know how these opportunities come up at hitching pace,and have ended up hanging out with people I don't know for longer than I'd have thought, but at walking pace I can't see him ever getting to Hokkaido- Shikoku's the kind of place where you could walk down to the shops for milk and come back a month later with a cult following and a grounding in rocket stove construction (http://en.wikipedia.org/wiki/Rocket_stove) or somesuch.
So I helped in the tanbo (rice field) for a day, mowing the grass in preparation for the new growing season. The field is in a fairly relaxed state of dissaray, theres a big awning in which Kono keeps a teppan grill (one of those flat metal table-top grills), a fridge stocked with ingredients for okonomiyaki (http://en.wikipedia.org/wiki/Okonomiyaki) and a leather sofa. Needless to say we made okonomiyaki for lunch and fell asleep for an hour on the sofa before getting up and continuing the work rehabilitating Kono's broken digger.
I met a young man named Okuda who came to work for Kono and told me of a friend named Naomi Campbell in Imabari city in Ehime who would be happy to have me to stay should I be heading that way- I said I'd be sure to head in that direction if for nothing else than just out of sheer curiosity.

The curiosity only increased the next day when I arrived in Imabari to find Naomi's nickname is the one she uses when introducing herself, without a trace of a laugh. Her and her flatmate Naoko were incredibly hospitable, letting me help carry a tent to a nursery, taking me to a friend's cafe, cooking a great dinner (photo on flickr 18/05). They showed me their guestbook (former guests include the renowned guitar panda, a name I heard nonstop that week http://www.youtube.com/watch?v=BcG0f2NqH1s&feature=related) and in the morning Campbell gave me 5 rice balls in a napkin (or 5 onigiri in a furoshiki if you want to be specific) and a high five before pointing me in the way of the highway.

My next destination was Shimanto where I planned to meet a friend from couchsurfing, Leroy, who is teaching English out here. Took me twelve hours with a stop at a bizarre European-esque castle (http://wikitravel.org/upload/en/f/fe/Sogokoen.jpg) and the help of some particularly talkative drivers, including Shinichi who is the spitting image of my brother Pat and who dearly wants to see the Louvre, and Tomu who was just something else. Tomu worked at the post office, and drove me there first so he could lock the place up before dropping me closer to where I was going. He gave me a pile of useful promotional post office wares and we drove for two hours whilst he told me stories of his time travelling and working in hospitality management in Australia and Hong Kong, including hunting kangaroos with a jeep,how to offend Chinese businessman by preparing twenty double beds instead of twenty twin-bedrooms and how much it costs to de-offend them and instructions on how to survive should you find the sum of your possessions to be a pushbike, a cd player and 50 cents.

Now I'd heard that where I was headed was fairly rural but the size of the road on the map suggested to me there should at least be a convenience store (always a great place to hitch from). Tomu mentioned that this place was particularly quiet, so quiet in fact that as long as I was alright with it he'd drop me by a campsite on that road so if I couldn't get a lift I'd have a place to stay. It was very much night by the time I got there but I decided to keep on trying to hitch as I was just 15km from Leroy's and didn't feel tired.
How lucky I was to get a lift from a woman named Shizuka who was driving my way and wanted to practice her English. She told me her mother used to hitch-hike and also pick up hikers occasionally, so the whole concept reminded her of the fun she'd had in her childhood talking to travellers in the family car.
She dropped me off at Leroy's where I spent a great weekend, we drove to a music festival in the south of Kochi prefecture (photos soon probably) and went swimming/surfing.
Hitching to Shimane from Shikoku went very well at first but after a two hour wait in a ghost town parking area just over the bridge from Shikoku I was starting to get a bit tired. Crouching down with a snack by the side of the road a car suddenly stopped and a friendly-looking middle aged woman stepped out and asked me if I was a hitch-hiker and if  I was heading to Okayama. At that point I'd been thinking anywhere is better to hitch from than here so I said Okayama sounds great.
Well to speed things up I ended up in this car with Yasue who is a design teacher, her two students and a friend of hers. They were driving back from seeing the eclipse in Shikoku and Yasue said if I wanted to stay the night in Okayama I'd be more than welcome. I declined at first but when it started to pour with rain and she asked again I decided to accept the kind offer and take the opportunity to learn about design in Okayama.

Yasue was hospitable to an unimaginable level,she showed me around the office, introduced me to more of her students and after work arranged for friends to come over and we all cooked a giant stew together and talked till 2am.She said to come back if I'm ever in Okayama as she loves having guests.
The next day her friend Manabe came over and the both of them drove me to a parking area where I hitched to Hiroshima, getting a lift from a couple who own a sake shop just two minutes after waiting. By six that evening I made it to Shimane where I've been working the past 3 days with my old friends the Iwamotos and a fellow wwoofer from Germany. Heading out tomorrow and hitching back to Shikoku to see a musician I'm interested in play grand piano in a rice field. Only 5 days left in Japan, very glad to be able to hitch a bit more and see if I can pad out my cross-section of Japanese citizens (or at least those who pick up thumb-wielding foreigners).
Posted by Mike at 15:04 No comments:

The Lost Tribes Of New York
Posted by Mike at 15:15 No comments: 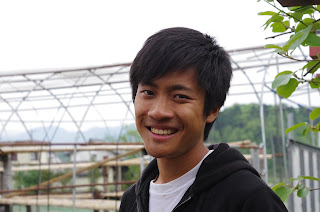 Today the animated animator left our ranks to go to Osaka, from where he'll fly back to Singapore on Friday. 気を付けてね！！
May you remember me by a little more of this sort of thing-
Posted by Mike at 13:49 No comments:

In lieu of describing current times-

Rather than describe my present, I'd like to have a man who knows how to coherently express his thoughts describe a past. Time is time.

To briefly shine a light on my situation- life has switched to revolving around interesting work for people I'm delighted to do it for, and all my photographs are of food (difficult to hold onto a camera the rest of the day without it getting covered in dust, chicken poo, or the dust of powdered chicken poo).
I'll start hitching around Shikoku sometime this weekend.
Posted by Mike at 14:55 1 comment: